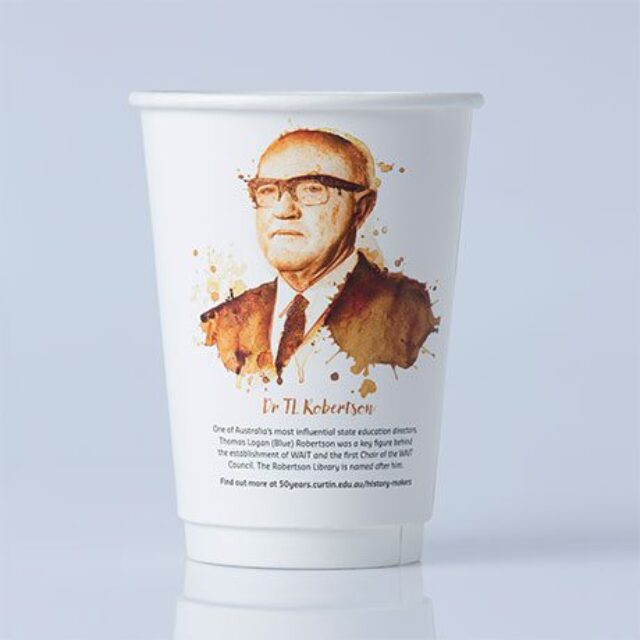 One of Australia’s most influential state education directors, Thomas Logan (Blue) Robertson was a key figure behind the establishment of WAIT and the first Chair of the WAIT Council. The Robertson Library is named after him.

TL Robertson was an important figure in education in Western Australia. From 1951 to 1966 he was Director General of Education and during this time he restructured secondary schooling, initiated curriculum reform and was a key figure in the establishment of WAIT.

He migrated to WA at an early age and grew up in Kalgoorlie, receiving his education through the State school system and at The University of Western Australia and, later in Britain, North America and New Zealand.

He began his career as a teacher and taught at a number of WA schools. He was made Inspector of Schools in Northam in 1941 and then served in the army’s education service from 1942 to 1945 before his appointment as Director General of Education.

Robertson initially dismissed George Hayman’s research on the need to build a technological institution but grew more convinced of the need and worked closely with him to convince the State Government, which eventually committed to the idea in 1960.

Robertson retired in 1966 but remained closely involved with the development of WAIT as chairman of its Interim Council until his untimely death in 1969. The WAIT library was opened in 1971 and named after him in recognition of his contribution to the Institute. This was particularly fitting as Robertson was also the first chief officer of the Education Department to emphasise the importance of libraries in schools.

More information on Thomas can be found within our ‘People who shaped Curtin‘ page and ‘Who was TL Robertson?‘ written by the Robertson Library.

TL Robertson is one of 14 Curtin history makers being profiled on a collection of limited edition coffee cups released as part of Curtin University’s 50 Years of Innovation celebrations. The cups will be available at most coffee shop outlets on the Bentley campus during August and October.