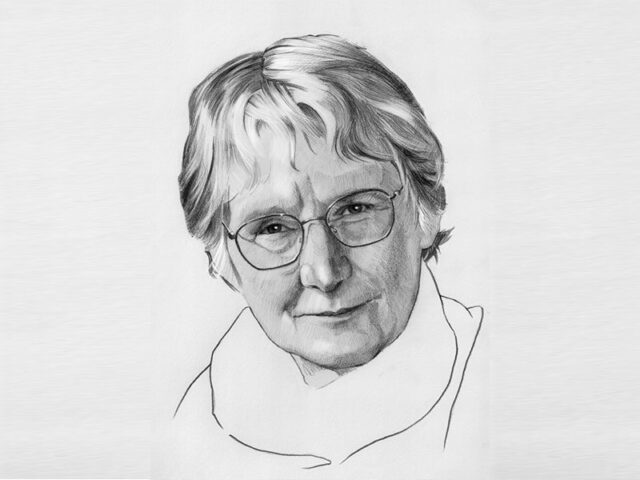 One of Australia’s defining authors, Elizabeth Jolley wrote 15 novels and four short story collections during her distinguished career. She was a cherished figure in the Creative Writing course at WAIT and Curtin for more than 20 years.

Born in Birmingham, England in 1923 to an English father and Austrian mother, Elizabeth Jolley attended schools in Strasburg, Paris and Hamburg, as well as a Quaker boarding school in Banbury, England. She trained as a nurse in London.

In 1959 Jolley migrated to Western Australia with her husband Leonard and three children, when Leonard was appointed Chief Librarian of the Reid Library at The University of Western Australia.

Jolley’s first book, a collection of short stories entitled Five Acre Virgin and Other Stories, was published in 1976, when she was 53 years of age. In 1978, she started teaching part-time at WAIT becoming Writer in Residence in 1987. In 1998 she was appointed Professor of Creative Writing and later became Emeritus Professor in Curtin’s School of Communication and Cultural Studies.

Jolley was highly celebrated, winning several international literary prizes and every major Australian award for her fiction. She received honorary doctorates from Curtin (1988), Macquarie University (1995) and the University of Queensland (1997), many civic awards, and had a number of works adapted to screen.