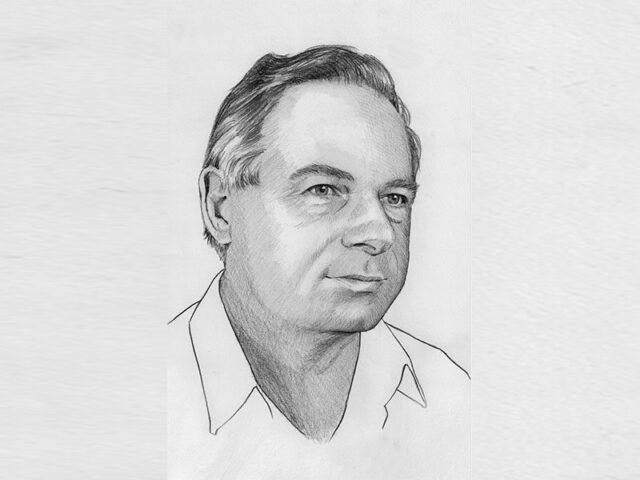 As Foundation Principal Librarian at WAIT Geoffrey Allen pioneered the introduction of computers into the Robertson Library, which was revolutionary at the time.

Geoffrey Allen was born in England in June 1927 and completed studies in geography at Oxford University in 1951. After moving to Sydney, he taught geography at Trinity Grammar School, worked at the State Library of New South Wales, then as a scientific librarian with CSIRO.

In 1961, he moved to Perth to work at the library of The University of Western Australia. Allen was appointed WAIT’s Foundation Principal Librarian in 1967, ahead of the Robertson Library’s official opening in 1972. He was largely responsible for determining the layout of the internal spaces of the Library in building 105 and he led the Library for almost 25 years before retiring in 1992.

During Allen’s time all aspects of library operations, from ordering to cataloguing, to searching and borrowing, changed as the library took advantage of technological advances. In 1980 the card catalogue was replaced by the microfiche system and in 1984 the first public access computer terminal was installed in the Library, where borrowers could see if an item was available.

The Library has continued to find innovative ways to set Curtin students and researchers on the path to success.  It is now open 24 hours per day and offers a fully web-based browsing and borrowing service, for hard copy as well as e-books, and electronic journal articles. Computers are available throughout the Library and an iZone provides the use of specialist computers.