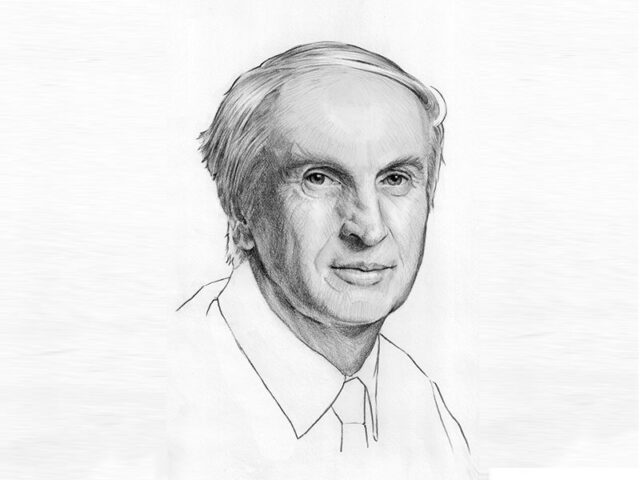 An internationally renowned physicist, John de Laeter is one of the most outstanding academics in the history of the University. The visionary behind significant science initiatives, de Laeter strongly influenced the direction of physical sciences research in Western Australia.

Educated at Perth Modern School, The University of Western Australia and McMaster University Canada, John de Laeter began his career as a science teacher at Bunbury High School. It was at a science teachers’ conference in the late 1950s when, inspired by a debate on the origins of the universe, he made the life-changing decision to return to university to study nuclear astrophysics.

In 1957 de Laeter commenced teaching at Perth Technical College. , he became Head of the Department of Physics at WAIT. Over the course of his career he negotiated with the University, businesses and State Government to invest in several visionary projects – Technology Park, Curtin’s Science and Mathematics Education Centre, the Scitech Discovery Centre and the Gravity Discovery Centre at Gingin.

As acting Vice-Chancellor of the newly established Curtin University of Technology, de Laeter worked hard to consolidate the organisation’s new position in the wake of its change in status, focusing on the development of its applied research foundations. Following the appointment of Professor John Maloney as the new Vice-Chancellor, de Laeter took on the newly created role of Deputy Vice-Chancellor, Research and Development remaining at Curtin until his retirement in 1995. Minor Planet de Laeter 3893 was named after him in 1996.