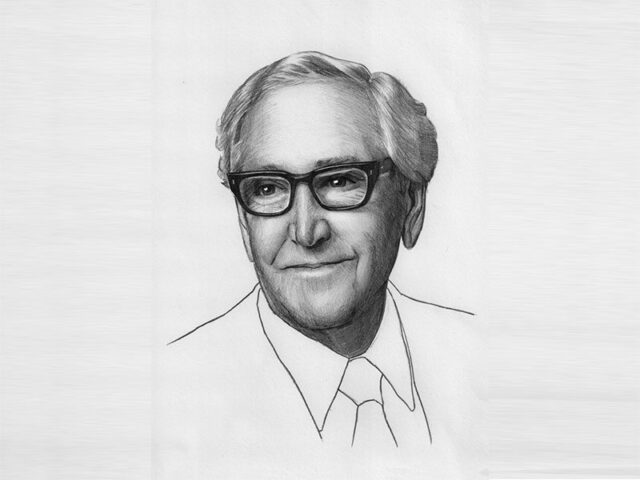 Western Australian School of Mines (WASM) graduate Sir Laurence Brodie-Hall was a leading figure in WA’s mining industry and one of the strongest and most influential supporters of the mining school.

Laurence Brodie-Hall migrated to Australia from London in 1924. He was a prospector in the Murchison and Eastern Goldfields during the depression, before commencing study at WASM in 1936. In 1946 after a stint as Captain with the Royal Australian Engineers during World War II, he resumed his studies, completing Diplomas in Mining Engineering and Metallurgy.

He joined the Western Mining group of companies as a geologist in 1948, and rose through the ranks until he was appointed Executive Director in 1967. Brodie-Hall’s belief in diversification led to the exploration and development of bauxite deposits in the Darling Range and the subsequent formation of Alcoa of Australia Ltd.

Over the years Brodie-Hall held many board positions including President of the Chamber of Mines of WA. He was responsible for the expansion of the gold mining activities on the Golden Mile, the development of the iron ore deposits at Koolanooka Hills and the establishment of the first long-term export contract for iron ore from WA.

Brodie-Hall conceived the idea of WASM’s Agricola residential college for students, raising significant funds for the accommodation complex and a range of other facilities.

He was knighted in 1982 and was awarded the Order of Australia in 1993. In 1987 Brodie-Hall received an Honorary Doctor of Technology from Curtin University, conferred as a mark of his contribution to WAIT and WASM. Brodie-Hall Drive in Technology Park, Bentley is named in his honour.